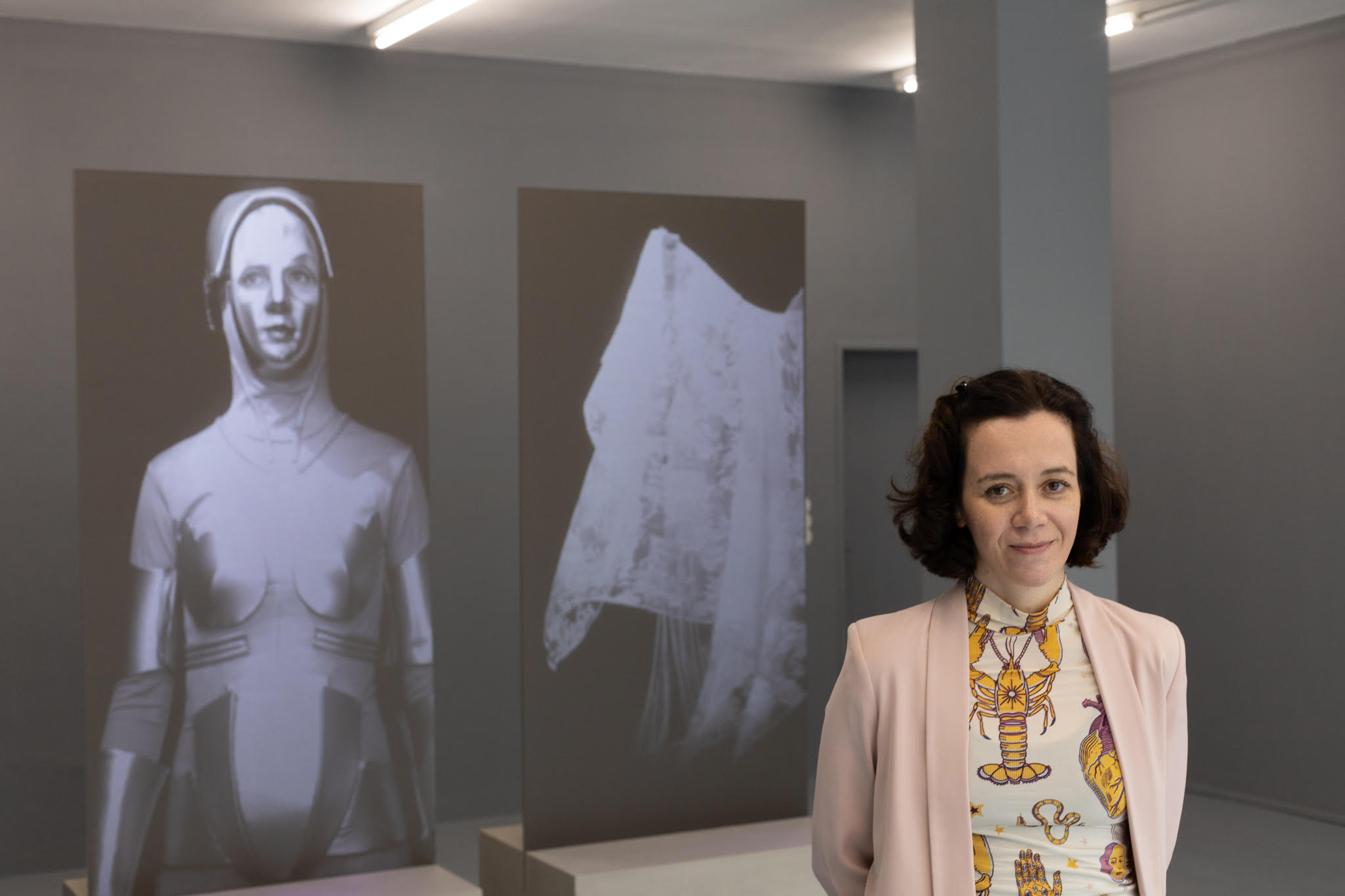 Nadja Verena Marcin explores human psychology and behavior via an intersectional analysis of feminism and emotional architecture. Her performance-based work subverts representations of women found in historical contexts to magnify ideological systems of power and psychological effects within their creation through a shift of context and meaning.

Her works have been exhibited internationally at Fridman Gallery (NY), Berkeley Art Museum (CA), ZKM Museum (Karlsruhe), Garage Museum (Moscow), Himalayas Museum (Shanghai), Gropius Bau (Berlin). Marcin has been a recipient of grants from the New York State Council for the Arts, Franklin Furnace, and Film- und Medienstiftung NRW. She was awarded a Fulbright scholarship, received an MFA from Columbia University, and has lectured at Wellesley College (MA), and Brooklyn College (NY). Her works have been reviewed in VICE, HuffPost, Hyperallergic and Artnet News.

What was your first job in the Arts and what was the most useful or important thing you learned in that experience?

Following my MFA program at Columbia University’s School of the Arts, I worked for a well-known female video artist in Brooklyn. In the process, I learned how to take the measurements of a famous New York drag queen (RIP); to treat your friends like stars for their best performance on set and to lend support to win the Guggenheim Fellowship, but also how to push back when you receive requests that fall outside of work responsibilities.

Tell us a little more about yourself. Where are you from and what is the arts community like there?

I was born in Würzburg (Bavaria) as the second child but first girl of four siblings to a German mother and a Slovak father – a Western family in conflux of ideas from both individualistic and communally-oriented society. We moved to Dorsten when I was five, a town 1.5 hours from Cologne in the Ruhr region of North Rhine-Westphalia which is a state rich in cultural funding and home to numerous museums and collections. Dorsten sits on the edge of an industrial melting pot where cities like Düsseldorf, Duisburg, Oberhausen, Essen, Dortmund, and Wuppertal shake hands while highways connect them.

When did you realize you wanted to pursue a career in this industry?

Making meaning has always been a big part of my life. I never felt that I could just rely on what was there and what I was taught. Growing up in a German suburb, I was able to break the quiet fabric of the landscape with the color of play: the urge to produce, to create, to be active – from building rabbit stalls and writing poetry to creating urban graffiti and shooting Hi8 videos – in a time pre social media.

As a media and performance artist, I work and exhibit internationally, mostly between Germany and the US, and occasionally I am invited to teach at art universities. My reenactment video “The Great Dictator” (2019) of Charles Chaplin’s eponymous famous speech (Los Angeles, 1940) was recently shown at Tāctus – the 17th Athens Digital Arts Festival.

At Kunstverein Ruhr in Essen, Germany, I just opened a solo exhibition – a premiere of the AI-based project “#SOPHYGRAY” (21-ongoing), featuring SOPHY, an audio bot that converses with viewers and recounts intersectional feminist philosophy. Two video holograms – inspired by Maschinenmensch in Metropolis and the symbolic figure Whore of Babylon – are part of an immersive installation which runs until February 13, 2022. During the exhibition’s period, my studio will also analyze data processed by the chat bot which will feed into a new performance piece to premiere on January 15.

Over the past two years, I’ve been producing my first feature film “Pocahontas Returns” (2019-ongoing) that explores the lost values inside our contemporary world and the search for ancient wisdom via the mise-en-abyme of hypermodern New York and neo-baroque Santa Cruz in Bolivia in an interracial love story blended with Telenovela and performance art. It’s been funded by the New York State Council and Bildkunst AG, shot between New York and Bolivia, where I’m excited to be heading in the beginning of next year.

Aside from my individual artistic practice, I co-founded and run the artist hub Kunstraum LLC with my partner, the architect Fernando Schrupp Rivero in 2015.  It’s a platform for a thriving community of artists adjacent to the Navy Yard in Brooklyn that lends support and exposure to emerging artists and curators with meaningful exhibitions statements.

How did your latest project #SOPHYGRAY came together?

Starting in April 2020, during the first lockdown, I started learning about AI through my project “#SOPHYGRAY” which lends its name from the first South African architect Sophy Gray who designed more than 50 churches built in South Africa in the 19th century around Cape town. I also had a research interest in representation of women in AI-based apps – related to so-called “commodity feminism” in which the image of the career-oriented woman is sexualized to hold the user’s attention. Later, it was through the postdoc Jason Basset at Max Planck Institute in Berlin that I started to learn about the different options for language creation via AI and to examine what implications these bring along. With artist Leon Meschede and art writer Sonja Borstner, I put together a small team which supported me in writing thousands of questions and answers for SOPHY featuring intersectional feminist philosophy.

The result is an expansive mixed-media installation that deals with social perspectives. The installation also consists of two video projections in which I play a double role as a human and a gynoid (female robot), filmed with French cinematographer Adèle Perrin in Berlin. Visitors to the exhibition at Kunstverein Ruhr can directly talk with the audio bot #SOPHY that lends many of its smart answers from inspiring female philosophers such as Donna Haraway, Audre Lorde, Anna Lowenhaupt Tsing, or bell hooks.

Take care of yourself and don’t force yourself into roles. Go home when you are tired. Take a break, rest. The art world is wonderful but exhausting and occupied by vampires who hog your veins and suck your blood if you let them. As an artist, you will always be exploited in different ways. It’s only profitable if you learn to say no and reconsider whilst taking a step back.

What is one of the greatest accomplishments in your career so far?
My first solo exhibition at a major museum, “OPHELIA”, took place at SCHAUWERK Sindelfingen in 2019 which was a milestone in my carrier. Being able to perform in front of a huge audience in a museum was like a dream. To work with a dedicated team of female curators in one of the largest private collections in Germany; having a “real” budget, technicians, and an exhibition architect at hand; being able to produce a monograph and receiving massive press and television coverage, was just incredible.

“OPHELIA” (2017-ongoing) is an architectural live performance and video sculpture that re-imagines the Shakespearean character within the framework of gender inequality and climate change, displaying the relationship between the destruction of the biosphere by the hands of mankind and the history of female hysteria. Since it was on a world tour starting in 2017 from Miami, New York, San Francisco to Cologne, Bolivia, and London, which will come to its end at the Aliseo Collection in 2022, it felt “easier” to produce the show as I enjoyed the celebration.

What is your advice for making yourself stand out in the workplace? Any good tips for giving a great interview?

Especially for women, I think it’s good to show off a bit. Pretend that you are a tad overly confident, exclusive, needed, and useful in every second, as if you speak five languages. Make promises, one-third of which you will have to live up to while still staying true to yourself.

What artwork is/was in your home office?

In my Brooklyn apartment, I have artworks that were gifts by my friends – Yvonne Roeb, Ulu Braun, Betty Boehm come to my mind. In Berlin, I have my drawing “Zero Gravity” (2013) that reminds me of an actual zero flight performance in Tampa Bay together with my cinematographer friend Violetta D’Agata as well as a photograph titled “Colonialist” (2015), for which we hiked hours into the Amboro Jungle close to Samaipata, Bolivia, where the world’s oldest plant – giant ferns – are growing for centuries.

What about the art world in 2022 are you most excited about?

I am excited about the rising interest and funding opportunities in cross collaboration between art, tech, and science. Coming from an extended family of doctors, I always yearned for that bridge to science. I love learning from others whilst producing a piece. Working on “#SOPHYGRAY” with the spirited team from IT company NOVATEC – the main sponsor – has been overtly inspiring. It’s generally nice to exchange with experts from other fields; it’s rewarding to understand the scope and depth of other people’s professions and worlds.

I believe it’s up to the artists to start the “opening up”. There are too many conflicts inside of our jobs and relations with curators and dealers that we don’t speak about. It hinders no one more than us. People engaged in the business side of art have no use of artists talking. But it’s up to us to visualize the power structures that we are surrounded by, share experience, set up new structures, establish rules, laws, break down abusive hierarchies, find support models, and lift existing market dynamics to learn and progress in all directions. There needs to be a theoretical divide between research and market driven work – with funding at both ends. These strings of art should be inside of a positive competition. 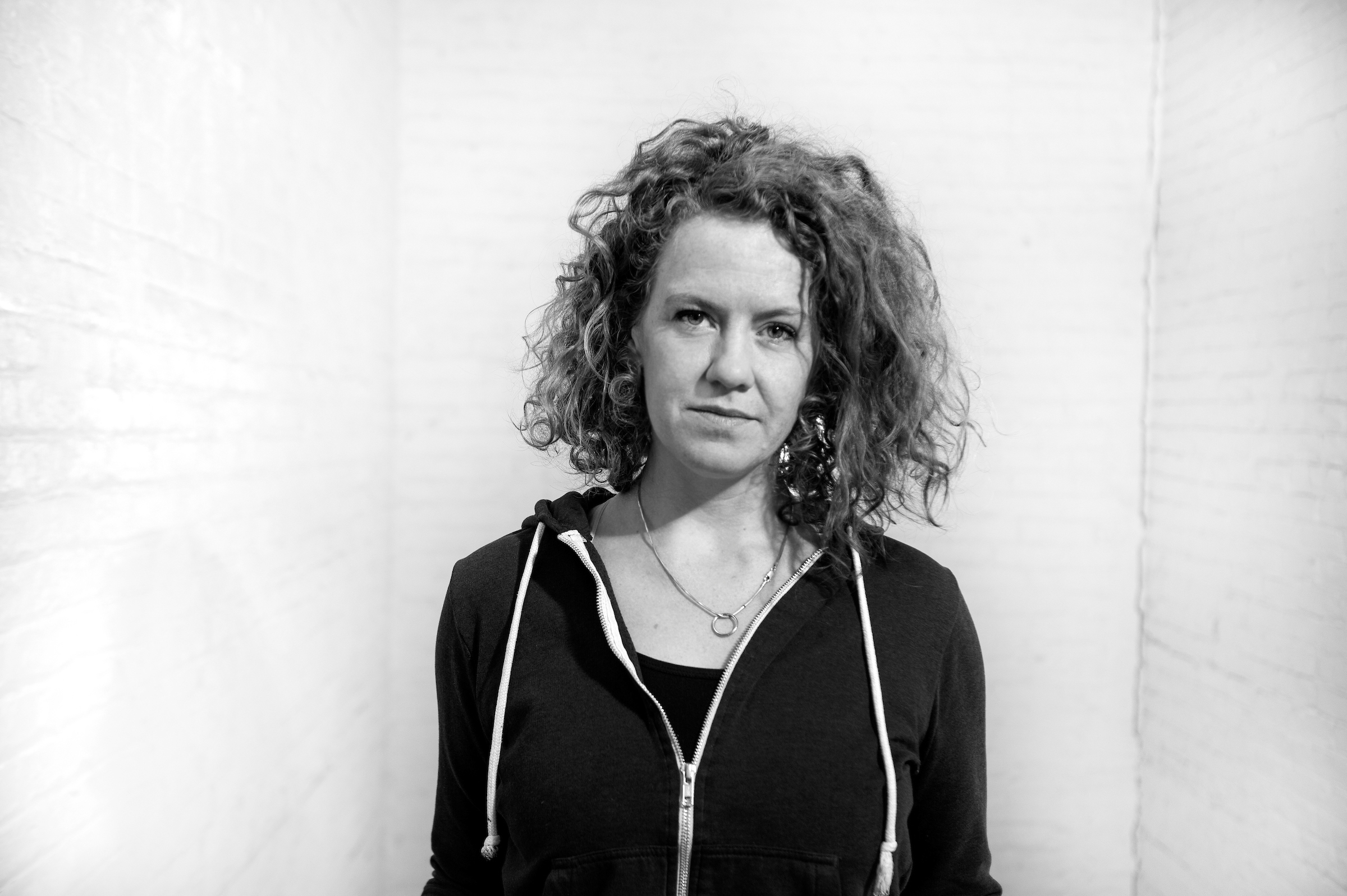 Anne Muntges – Artist, Illustrator and Director of Development and Residencies at the Monira Foundation

Anne Muntges – Artist, Illustrator and Director of Development and Residencies at the Monira Foundation