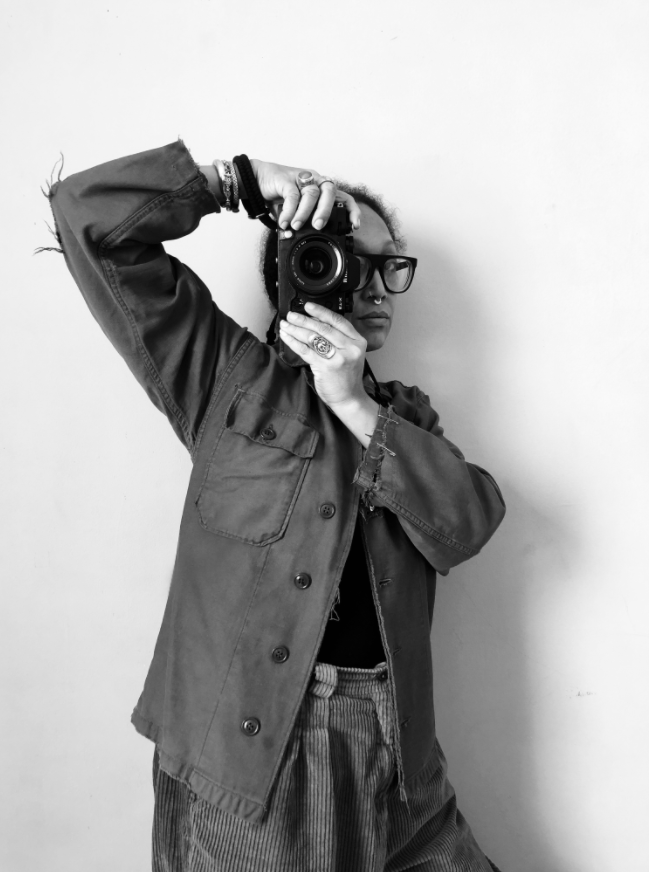 Sade Boyewa El is a Documentary, Portraiture and Street Photographer, Community Activist, and Organizer who lives and works in Harlem, New York. A native of Sweden and Nigeria, her colorful and vibrant photographs pay homage to her transnational and multicultural upbringing from around the world. Sade’s work challenges the viewer’s eyes by looking past the obvious. With her images, she seeks to inspire people to look carefully at the world around them to uncover all the beauty that exists in the most unusual and unexpected places. Sade earned a bachelor’s degree in Social Psychology of Women, Gender and the Family from the CUNY Baccalaureate for Unique and Interdisciplinary Studies. Her work has appeared in various group exhibitions in New York and Europe. This year she received a grant from Lower Manhattan Community Council LMCC and NYFA, to bring FACES OF HARLEM (FOH) into the public sphere as an outdoor public photo exhibition, presented throughout the four historical parks in Harlem; Morningside, Marcus Garvey/Mt. Morris, Jackie Robinson, and Rucker parks.

I’ve always been fascinated with photography as a form of storytelling. Although I always had access to cameras. I vividly remember the day I went out and bought my first camera with money I’de saved up from working for these two photographers in Östermalm, Stockholm, Sweden where I was printing their images in the darkroom. This was one of my first jobs. I was 15 years old. Taking pictures and printing in the darkroom was truly magic! In fact all the magic happens in the darkroom. I can still remember the distinct smell of chemicals, which I found rather appealing, much like gasoline. I was absolutely captivated and mesmerized by how photography allowed me to capture people, their stories and all the precious moments in time, that in the blink of an eye would be gone, but would slowly reappear again in the amber red light of the darkroom. Slivers of silver on a paper, came together and became whole again, something tangible I could hold on to and cherish forever and ever and revisit time and time again.

What was your first job in the Arts and what was the most useful or important thing you learned in that experience?

My first job in the arts was working for these two photographers in Östermalm, Stockholm Sweden, where I was printing their images in the darkroom. I was 15 years old.

As a society today, we are taking more pictures with our cellphones that ever before. However, these images do not survive beyond a year, have any real meaning or life beyond “the cloud.”  One of the most important aspects of analog photography and printing images is the historical value. Physical images and negatives are tangible, something we can hold on to and cherish forever.

Where are you from and what is the arts community like there? Has your upbringing shaped what you do in the arts today?

I’m Afropean, a native of Sweden and Nigeria.

Growing up I was always exposed to art; traditional, folklore, contemporary, photography, cinema and theatre. My Mother was a great photographer and retoucher, back then by hand coloring photos. She would take pictures most everyday while I was growing up.

Exposure to art, creative freedom, traveling the World meeting people from all different backgrounds and cultures, has had a huge influence on my artistic development. This is what led me to wanting to capture and document people and their stories with my camera.

Tell us more about FOH and the thought process behind conceptualizing the project as a public, outdoor installation.

FOH is a series of portraits long in the making. I’ve been making portraits of all the beautiful people I’ve met and come to know over the years since I first moved to Harlem over 20 years ago.

In 2019 I started setting up PoP-Up photo booths at different events around Harlem and invited a group of photographers to share this journey with me, capturing and documenting who we are as Harlemites. The beauty, creativity, resilience, and magic of Harlem and its Peoples, as it fights to preserve its legacy in the midst of rapid gentrification.

The same year I applied for a grant with LMCC. With 2020 being a total washout, I was asked to reapply again for 2021 and was one of the lucky recipients of the Creative Engagement Grant.

FOH is my LOVE letter to our beloved Harlem Community celebrating the Legacy of the Harlem Renaissance with 100 Harlem Portraits by 10 different photographers.

FOH seeks to act as a cultural mediator, presenting work and people that are often underrepresented in Harlem, with a particular emphasis on highlighting the neighborhood’s African American and diasporic cultures. In disinvested, low-income communities of color, art acts as tools for strengthening cultural identity and processing trauma. FOH will facilitate an understanding of the past by envisioning a shared, more equitable future through the power of photography and oral history.

What are the next steps for FOH after its iteration at Juno Medical Center?

As a rule of thumb, I don’t speak about any future projects until they have been fully realized. What I will say though is that we look forward to bringing more public art to Harlem in 2022 and beyond.

What is one of the greatest accomplishments in your career so far? And what has been a challenge?

The best career decision/accomplishment I’ve made for myself was to never go back to work for someone else or in the corporate world after being furlough at the beginning of the pandemic. This has challenged me as a creative and artist, having to reinvent myself by being resourceful and thinking outside of the box. I had to make a lot of personal sacrifices just to survive. As a woman of color, it’s been very rewarding to have been able to create a platform for other photographers to showcase their work.

What is one of the weirdest things you have had to do on the job?

If it was something out of the ordinary “weird” I most likely didn’t do it. But then again, someone’s wired is another’s normal and vice versa…

Being flexible, thinking outside the box and open to new ideas. Being your own best boss.

What are you most excited about in the art world this year?

More public art and for photography, as well as emerging artists to be included in bigger platforms. I’m also super excited about blockchain-based systems, NFT’s, which have the potential to reshape the marketplace for good.

The art world definitely needs to be more diverse and inclusive. Less elitist! People of color are substantially underrepresented! We don’t have the same access to these larger institutions or spaces to showcase and sell our work in general. The art world is currently an infrastructure that is still controlled and dictated by privilege, power and profit, from blatant structural bias that favor only but a few.

Public art and blockchain-based systems are definitely the way to go moving forward. This way artists will have the ability to make the money they deserve and the potential to reshape the marketplace for good.

Dawoud Bey’s An American Project at the Whitney Museum

If you could own work by 5 different artists, who would be in your collection?

Picking 5 is way too hard. Here is my shortlist: